From her parade of skin-tight, head-to-toe spandex looks to her high-drama Met Gala gowns, Kim’s style is constantly evolving, but drop statement earrings are a mainstay on her fashion runway.

It’s been over 15 years since we first met Kim Kardashian on the series ‘Keeping Up With The Kardashians.’ With the arrival of her family’s new reality show, ‘The Kardashians,’ we took a look back on her most iconic, high-fashion looks.

When it comes to wearing designer clothing, Kim takes the one-and-done approach. But she’s consistently worn diamond drop earrings throughout the years. The pair she wore at her wedding to Kris Humphries in 2011 measured in at 28-carats. Outdoing herself 11 years later, Kim recently wore enormous 100-carat oval-cut diamond drop earrings to the 2022 Vanity Fair Oscar party.

Here are six similar styles guaranteed to make you shine just like the celebrity star. Perhaps not as high-priced as the reality TV star’s own, these Kim Kardashian drop earring dupes are just as dazzling. 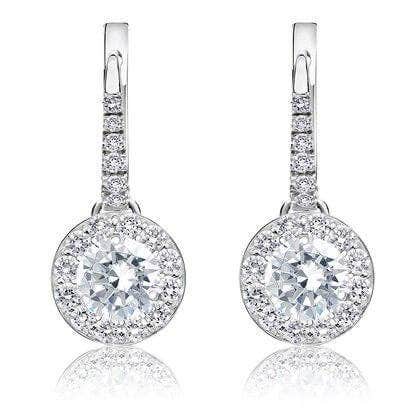 These lustrous diamond-dusted earrings are the epitome of the Effy® name, delivering bold sparkle and fine craftsmanship.

In the modern girl’s jewelry collection, infinity hoop earrings are an essential without a doubt. Regardless of size, metal, or material, hoop earrings never fail to make you feel more fashionable. And in this day of virtual offices and Zoom meetings, hoop earrings are as important to your on-screen look as shoes are to an outfit.
Just like the right pair of shoes, the hoop earring is completely versatile. It can be the ultimate statement earring for cocktail attire or be a minimal accent to go with your weekend athleisure. So it should be no surprise that the infinity hoop earring and its continuous circle design have stepped up to be Spring’s number one trend in earrings. From simple to diamond-studded, here are five pairs to add to your rotation ASAP.

Large in size, yet lightweight on the lobe, these 14K gold infinity hoop earrings help you maximize the minimalist look. Pair them with anything from boho dresses to body-con athleisure. Learn more > 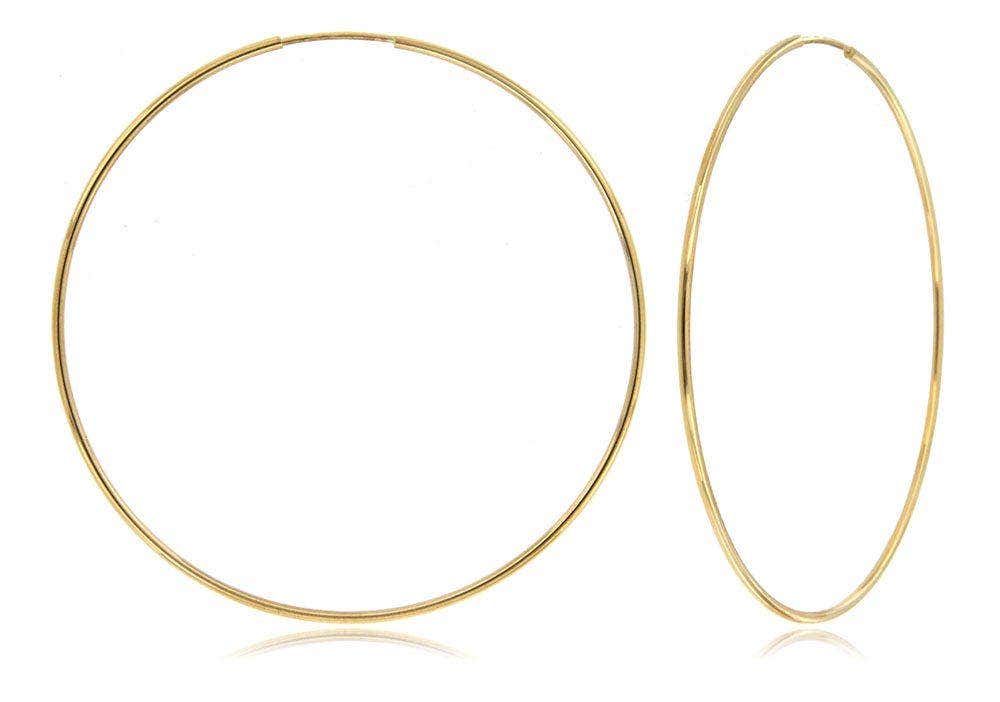 2. The Showstopper OR Pavé the Way

Twinkling like a city skyline at night, these pavé cubic zirconia sterling silver infinity hoop earrings add that extra touch of glamour to any outfit. Wear them with upswept hair and a bare neck for the most powerful impact. Learn more > 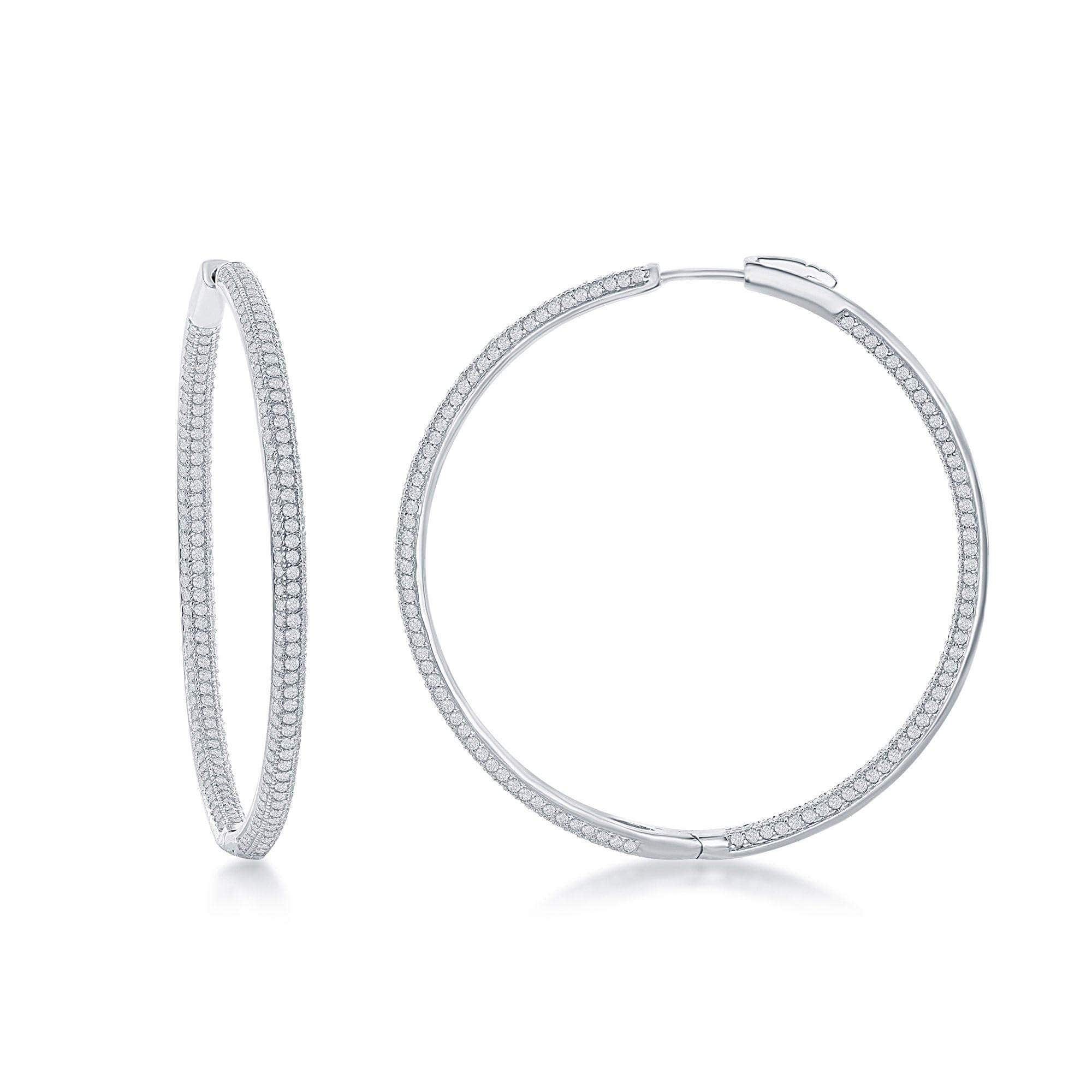 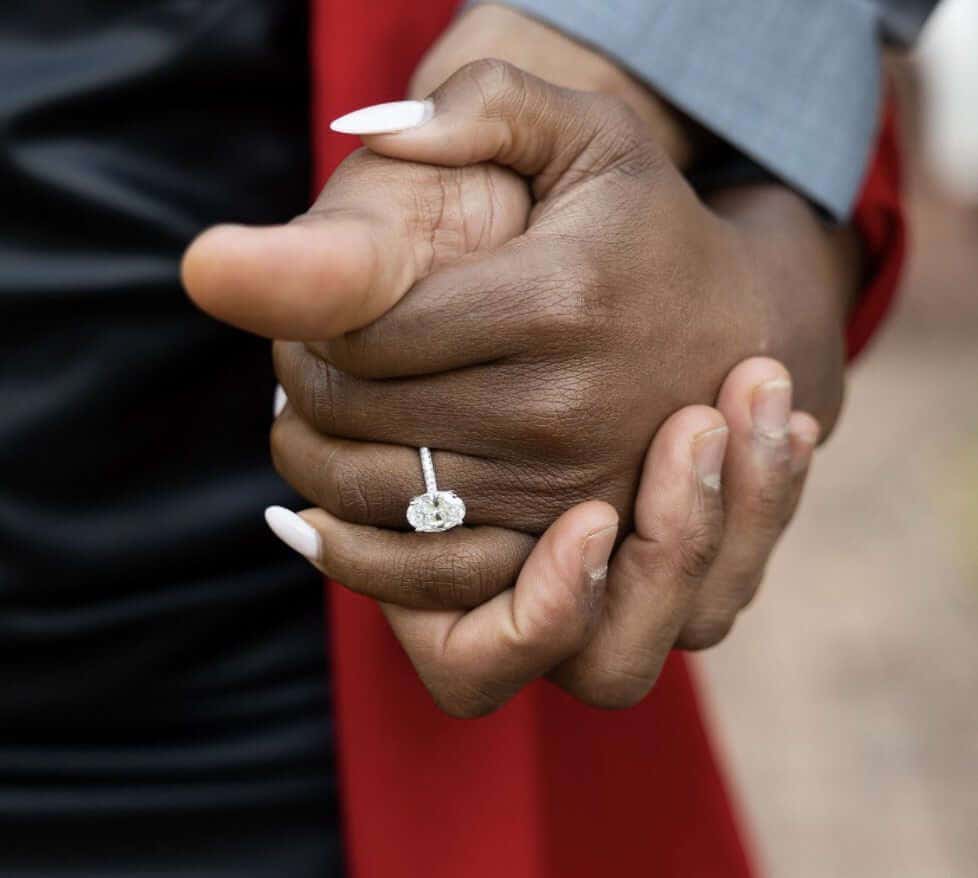 Simone Biles has gone from Olympic rings to engagement rings when her NFL superstar boyfriend, Jonathan Owens popped the question on Valentine’s Day. The 24-year old Olympic Gold medalist must have flipped when she saw this spectacular piece Owens designed in collaboration with celeb jeweler Zo Frost. The 3-carat oval diamond, which merits an F color and VVS2 clarity, is set on a platinum or white gold band that’s dusted with 34 pavé diamonds. For a finishing touch, Owens added a hidden halo that we’d like to think represents the intimate and loving bond the two athletes share.

Although she wears a one-of-a-kind design, the soon-to-wed Biles isn’t the only celeb sporting this shape of diamond engagement ring. Hailey Beiber’s oval engagement ring, logs in somewhere between six and eight carats. The ring is flanked by two V-shaped wedding bands, both in 18-karat gold and lined with diamonds. Kourtney Kardashian's left hand also sports a ginormous oval diamond engagement ring set on a thin pavé diamond band which is estimated to be between eight to ten carats. Other celebs with the trending design include Blake Lively and Jasmine Tookes.

But what makes this look so appealing? For starters, the elongated shape can make the stone look bigger than its actual carat size. Round, princess and cushion cuts are still more popular as they are considered safer choices. But oval is the perfect shape for brides who want their ring to stand out and reflect their unique sense of style.

Check out these fabulous five styles that look so similar to Simone Bile’s fabulous engagement ring and see what the oval-cut diamond trend is all about.

3 Easy Jewelry Gifts For Him

It’s 2022. By now you’re hip to the fact that men and jewelry go hand in hand. Yes, whether it’s a bold pair of diamond stud earrings or a commemorative ID bracelet, the modern man’s jewelry box is packed with fresh classics that are not short of shine and shimmer. So when you want to show him the love, we rounded out the best men’s jewelry to prove that gifting is all in the wrist.

A wristwatch makes a wonderful gift. With its abilities to accent formal wear and elevate athleisure looks, a watch is to menswear as the handbag is to womenswear. In this day and age when timekeeping is digitally embedded into our smartphones, the watch you choose should balance function with his sense of fashion.

For example, does his idea of the perfect day involve hiking and exploring the great outdoors? The resilient Field Automatic Chronograph Watch by Hamilton is made for adventure. 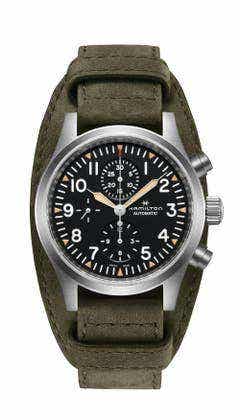 For the sport and fitness fanatic, the CZ Smart IP Hybrid Heart Rate Smartwatch by Citizen is made to keep up with his health-driven lifestyle.

All Linked Up: The Chain Necklace Past & Present

From the first chain created in Ancient Egypt to the million-dollar bling worn by today’s hip hop artists, the popularity of gold and silver chain necklaces has been on the rise for eons. Learn more about these linked legacies and meet our favorite necklace chain types.

The Chain Necklace: A Look Back

The oldest piece of jewelry was found in a cave along the South African Cape shoreline. Archeologists dated the 41 seashell beads to be 75,000 years old and have inferred they once hung on a necklace made of organic material.

As civilizations grew in the ancient Middle East, jewelry design became more sophisticated as gold and silver came to be highly valued. Around the 8th century BC, the Egyptians were the first to develop the “strap chain” which is strands of chain connected to lie side-by-side, creating a flexible mesh band. By 300 BC, the world’s elite upper-class were all wearing chains that contained gemstones in the links.

Over 1,000 years later, African King Mansa Musa, the richest person in history, ruled much of West Africa in 1312 and owned more gold necklaces than any human – ever! Imagine as much gold as one could possess and double it. Not unlike the ancient Egyptians, he draped himself in chains prevalent with evil eyes and other protective amulets attached.

King Mansa Musa’s legendary panache for exuberance no doubt influenced Leonardo da Vinci’s more modest take on gold and silver chain necklaces. Sweeping across Europe during the Renaissance, his designs helped propel the pendant, worn on long gold chains, to be the “it” accessory of his time.

The Link to Modern Luxury

Fast-forward to the 18th century, and the chain’s use has remained much the same, with a few added tasks: holding a pocket watch in place, dangling a fur muff, or holding up a pair of trousers when worn as a belt.

3 No-Fail Valentine’s Day Gifts For Her

Has procrastination gotten the best of you, and you’re finding yourself currently giftless for the rapidly approaching Valentine’s Day? Well before you dash out and purchase a place-holder present that lacks meaning or passion, consider these Cupid-approved picks that pack all the love and magic the lady in your life deserves.

Start a new tradition by commemorating Valentine’s Day, and every holiday after, by building a beautiful charm bracelet. Rembrandt Charms crafts miniature works of art that stand in as precious, and oh-so personal, mementos of your adventures together. First trip to Paris? Add a lustrous silver Eiffel tower charm to her bracelet. Does she play a musical instrument? Peruse an entire orchestra of options including flutes and guitars. The combination you create over the years will be as unique as your one-of-a-kind love.

This Valentine’s Day, we recommend adding a heart to start on the cable link bracelet of your choice to express your aim to share and cherish your special moments together in the years to come. 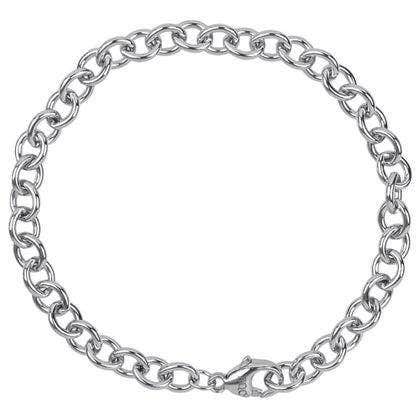 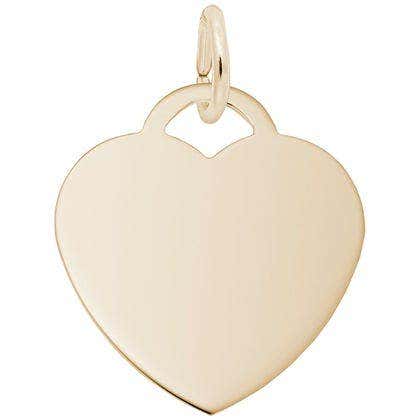 Megan Fox and Machine Gun Kelly sparked a surge of wedding ring replica searches on the web when the couple posted their engagement on Instagram last month. Custom designed by Kelly and London jeweler Stephen Webster, Megan Fox’s engagement ring is a beautiful, pear-shape emerald and diamond toi et moi (you and me) style that’s trending so hot at the moment.

As a couple known for coordinating fashion looks on the red carpet, it’s only fitting that the style is actually two complementary bands of thorns – made in 18 karat white gold sprinkled with colorless pavé diamonds. Rivaling the couple’s magnetic attraction, the two rings nest perfectly together by the use of magnets buried within the gold. Of course, an out-of-this-world  design such as this comes with a price tag to match.

But here are a few options with all the glimmer and shimmer, without breaking the bank.

If you love the toi et moi look, but aren’t so into the pear-shape, this design featuring twin heart-shaped created emeralds is a stunning alternative. Plus, the grooved sterling silver band lends the look of a stacked, infinity style ring. 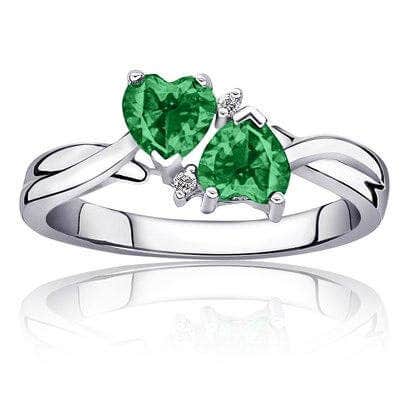 5 Heart Rings Everyone is Crushing On

What’s not to love about heart-shaped jewelry? A heart-shaped ring, whether adorned with diamonds or topped with your color of birthstone, is unabashedly romantic and the perfect symbol of love for year-round wear. Here we selected our five most swoon-worthy heart rings that will get you in the mood for Valentine’s Day.

Radiant rose gold, lustrous silver, luminous diamonds, oh my! This artful heart topped ring outshines them all with all the sparkle a girl can only dream of. The three diamond center is surrounded by a heart-shaped halo of smaller diamonds for an ultra sparkling finish. 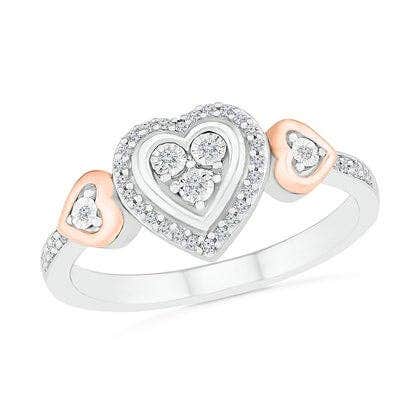 Opt for bold color with this fashion-forward heart-shaped gemstone ring. With two created pink sapphires and one created red ruby – all surrounded by diamonds, it just may be the jewelry equivalent of the ‘mic drop’. 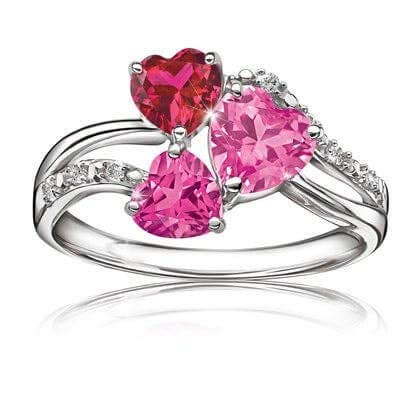 All hail pink sapphires and sparkling diamonds! This Princess crown ring, also known as a tiara ring, is an essential statement piece for a truly complete jewelry collection. The open-concept center heart showcases a round created pink sapphire for a divinely dramatic display. Long live the Queen, indeed.

The moon and stars, champagne and bubbles, and X’s and O’s. When it comes to celebrating your one-of-a-kind love, few pairings are as iconic as Valentine’s Day and jewelry. And nothing delights more brilliantly than the gleam of a diamond beaming from a little square box. If you’re reading this article, it's safe to assume you are past the just-getting-to-know-you chocolates and in search of that perfect something for your special someone. Good thing we’ve curated for you the most-loved styles, like ruby earrings, and big-moment pieces, like new engagement rings to give your Valentine. 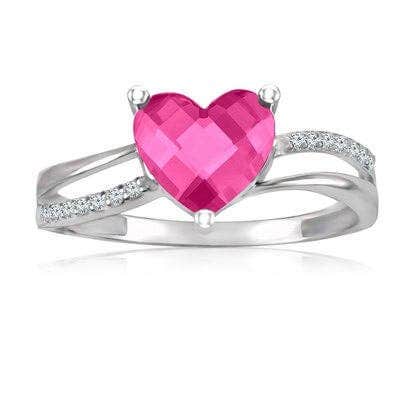 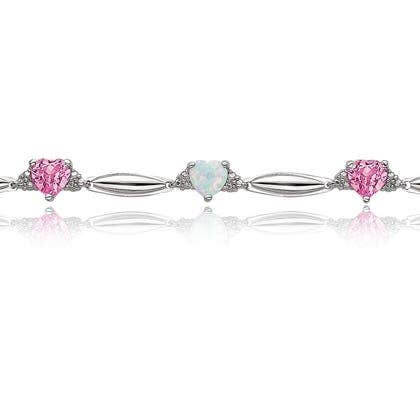 Whether set in sterling silver, like these luminous cushion-cut pink sapphire earrings or set in rose gold, like our rose gold cros

While engagement rings tend to steal the spotlight when it comes to marriage-related jewelry, wedding bands shouldn’t be overlooked. Wedding rings are symbolic and are a practical expression of your love, commitment, and union with your significant other. Plus, they add a little extra sparkle to your ring finger! At Rogers & Hollands and Ashcroft & Oak, we offer a large selection of timeless and traditional wedding bands.