In Stock
SKU
3145424
$845.00
MAKE MONTHLY PAYMENTS, APPLY NOW →
Are you looking for an iconic watch? Daring, pioneering and unconventional in design, the Ventura is one of the most iconic Hamilton watches. The world’s first electric watch looks just as good today as it did in 1957. The Ventura is a faithful tribute to the original 1957 model, which made watch-making history as the world’s first electrical, battery powered watch. Featured in Men in Black I (1997), III (2012) & IV (2019). Worn by Agent J, K & M, played by Will Smith, Tommy Lee Jones & Tessa Thompson. With its daring and distinctive design, it quickly became an icon and a collector's item. Ventura's latest incarnation is a faithful tribute to the original and mirrors the pioneering shield shaped celebration of Mid-Century Modern design. Design detail of the case of the new model mirrors that of its ancestors. The dial is complete with digit markings all culminating in an embossed rounded point looking like atoms. Model number: H24411732
In StockReceive this item by Friday, March 12, 2021 with Free standard shipping
In Stock at Out of Stock at : Choose “Pickup in Store” at checkout to pick it up today. Same day pickup for stock size only.
Add to Wish List
Skip to the end of the images gallery 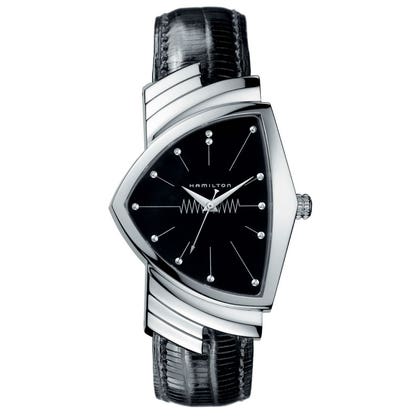 Share:
Skip to the beginning of the images gallery