Our Generations of Love

There’s no better feeling than sharing moments of love and admiration with those you cherish. We pride ourselves on being a part of these special memories with you. Whether it’s gifting a token of appreciation, or asking the one you love to marry you, our jewelry has seen some of the most meaningful and heartfelt occasions for over a century.

We know you have options — but we promise, we’re different. Unlike most stores, we’re a family-owned & operated jewelry

company — and you’ve trusted us to help you make moments special for over 100 years. 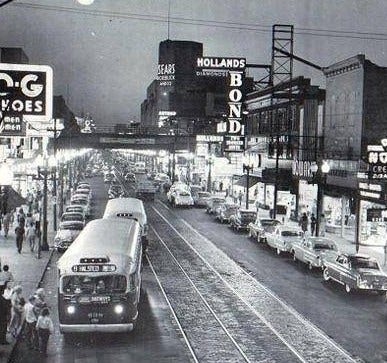 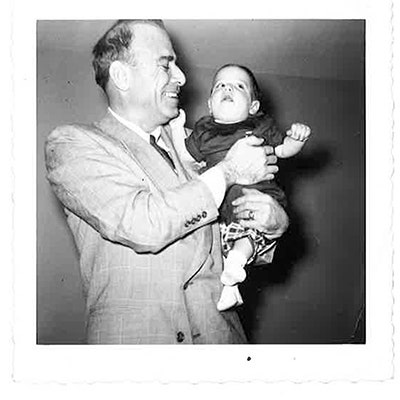 As a true American success story, having grown from one store to a full-service multi-channel jewelry retailer, we understand that true love is about bringing people together & celebrating milestones better than anyone.

Founded in 1910, we understand the responsibilities that come along with being the oldest and largest family-owned jewelry retailer in the United States. Passing down our passion for quality jewelry, constant innovation and guest service for over four generations, has made the company into what it is today.

We are proud to say that for over 100 years, we have been dedicated to helping multiple generations of couples & families create magical moments with our jewelry.

Here's a glimpse of how we became what we are today, the oldest & largest family-owned & operated jeweler in the nation. 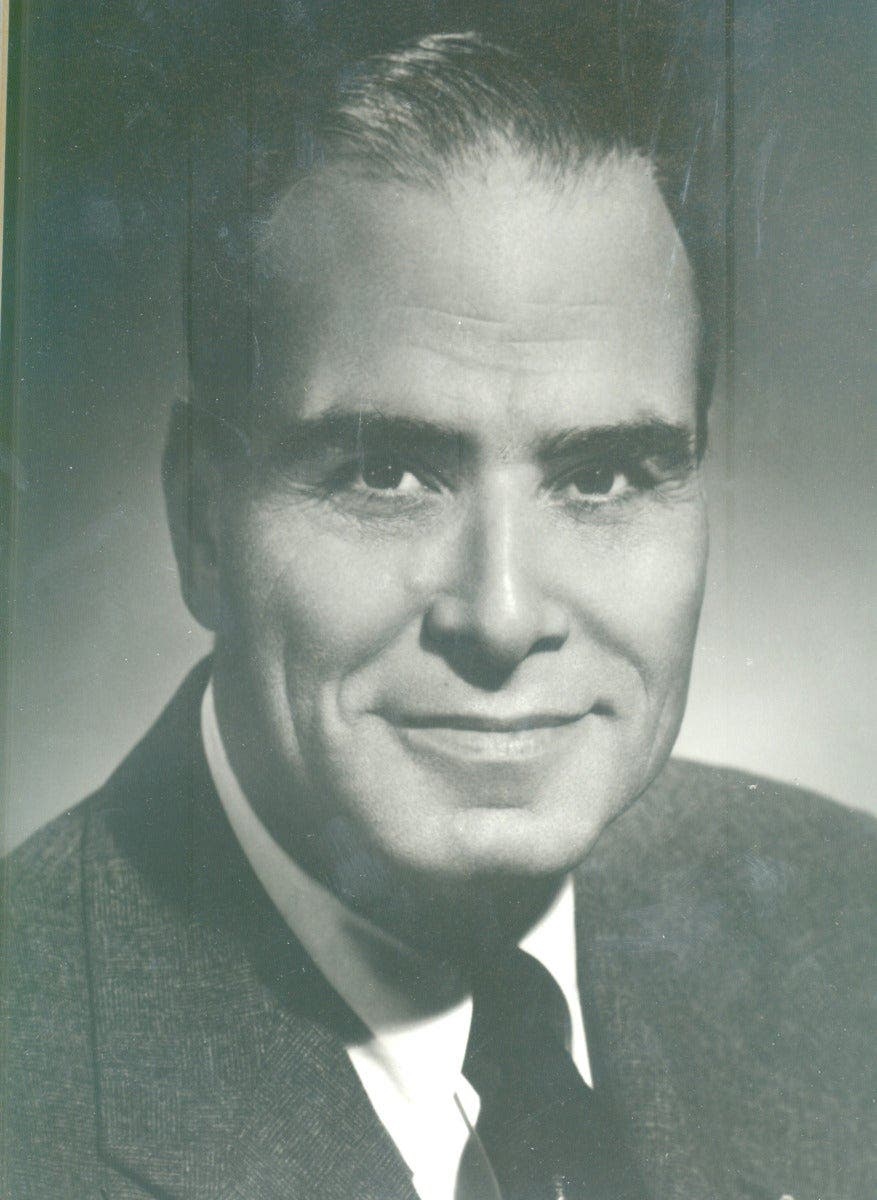 Hollands Jewelers, open since 1910, would later be acquired by Rogers Jewelers.

Rogers Jewelers started in 1945 with the opening of a store in Harvey, Illinois by Bernard Friedman and Herbert Goldstone, both experts in the jewelry business since the 1920’s.

It was during this time, the company began laying down the foundation of a strong-knit, family owned and operated business. 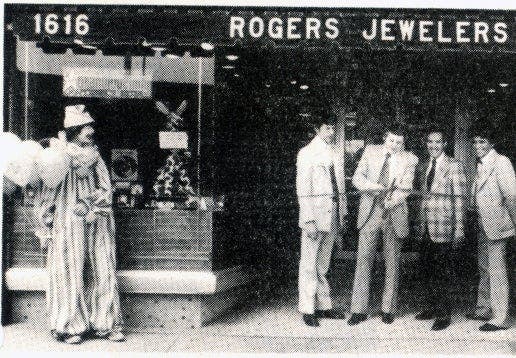 Alan Kadet married Juell Friedman (Bernard's daughter) & joined the firm in 1949. Together Alan & Bernard worked for many years to establish a strong foundation for the business.

As Alan Kadet & wife Juell continued to build the success of this business, they also built a family including a daughter who recently celebrated more than 30 years with the company in its merchandising department. 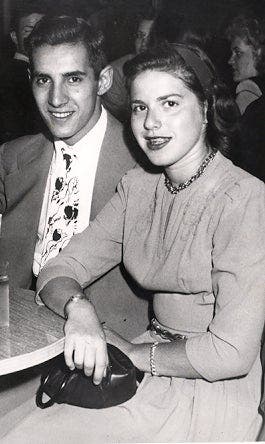 Mr. Friedman served as Chairman of the Board of the company until his retirement in the mid-1980’s at which time Mr. Kadet, then President became Chairman. Mr. Goldstone served as Director until his death in 1972.

By the late 1970's, the company had grown to 15 stores. In 1979, the company made its first significant acquisition with the purchase of Hollands Jewelers, a chain of six Chicago area stores including locations in such prime properties as Woodfield Mall & Water Tower Place. 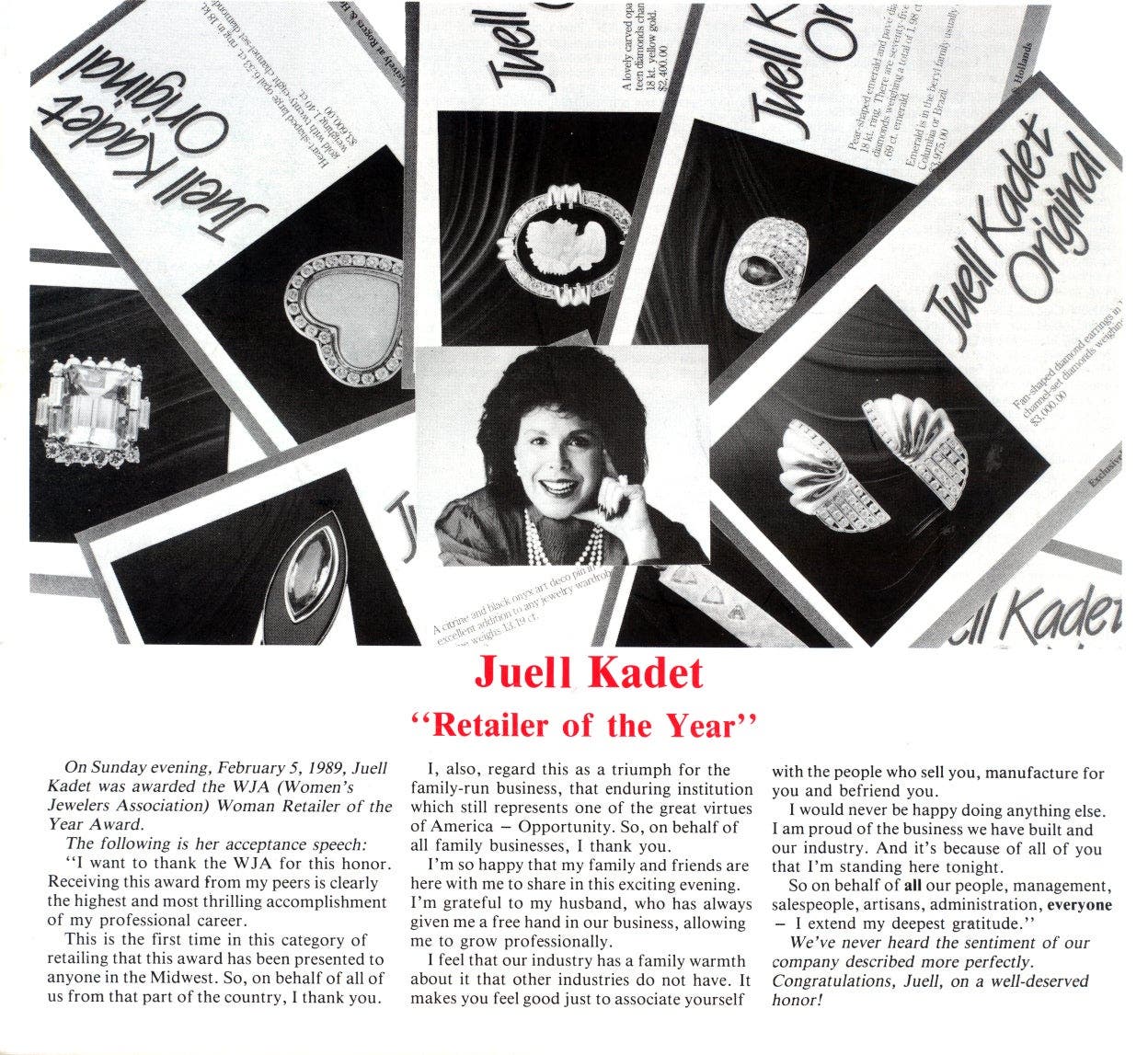 The 1980’s brought further expansion to the company, including its first Indiana store opening in 1983, Wisconsin in 1985, and Missouri location in 1988.

The Wisconsin stores were part of the company’s second major acquisition, the purchase of Armond’s Diamond Centers, a chain of eight stores located in Illinois and Wisconsin.

At its annual competition, retail jewelers are honored for the special contributions they’ve made to their stores, their communities, and to the jewelry industry.

By November 1991, the company was operating a successful 46 stores, and continued to grow in Michigan and Minnesota through 1999.

By the end of 2001, the company was operating 64 stores in six states, having expanded into Ohio.

Among the 64 stores open at the end of 2001, the company was operating three locations under the trade name Ashcroft & Oak Jewelers, which was introduced in that year.

The Ashcroft & Oak name was, and continues to be used in more south-eastern location states, while Rogers & Hollands Jewelers locations are typically seen in more north-western states.

In 2008 the company made the move into Kentucky & Tennessee, and built an additional four Ashcroft & Oak Jewelers locations.

By Fall of 2014, they continued expansion east by opening the first Ashcroft & Oak® Jewelers in Pittsburgh, Pennsylvania. 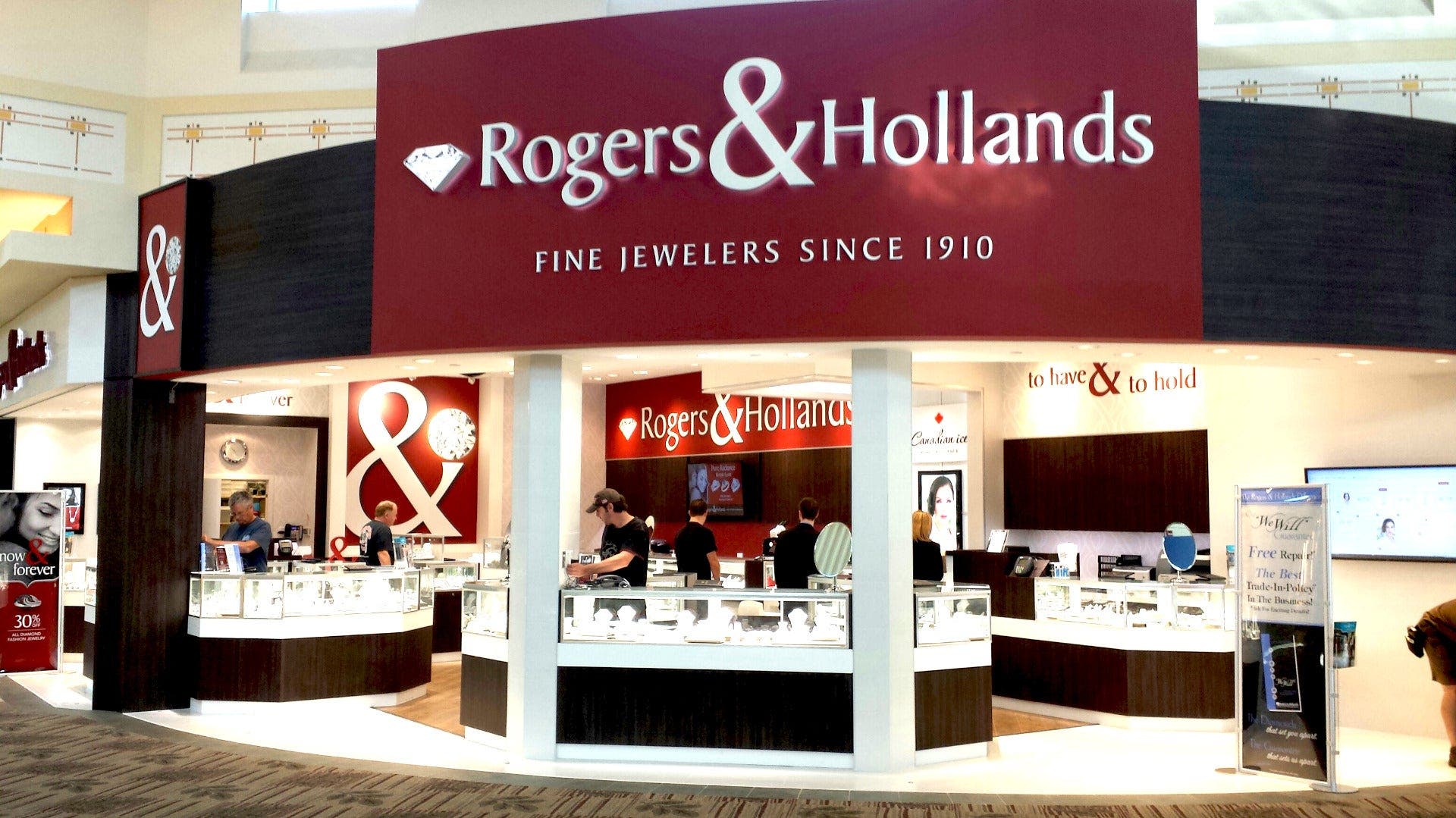 Most recently, opening new locations in Minnesota and South Dakota, they remain true to their mission of providing guests a lifetime of memories, not just locally but across the country.

Family-first principles remain intact and Rogers Enterprises Inc. maintains the comfortable atmosphere of a family-run business, even with retail stores in 11 states.

Today, the company is looking into 2020 and beyond with 4th generation of family involvement, keeping the tradition of a family-owned and operated business strong.

They, along with countless others, continue to push our company forward in footprint and product assortment, helping people celebrate special moments along the way.

"To thank for our successes, we have you, our guests, who trust us enough to be a part of your special moments & become the jewelry store your families have depended upon for generations.

Like you, we understand the importance of traditions & making memories. We have created a family of stores with knowledgeable staff, unique merchandise & distinctive guest service.

Our store’s slogan, “jewelry created for now & forever”, establishes our product as jewelry that is not only fashionable today, but timeless in beauty.

We help make your special moments sparkle for all of life's milestones - engagements, weddings, birthdays, holidays, and those "just because" moments."

Compassion Looks Good on All of Us.

As our business efforts grow, so do our philanthropic ones. With all the love and support our family has been given throughout our time in the jewelry industry, we realized the importance of giving back to our community. 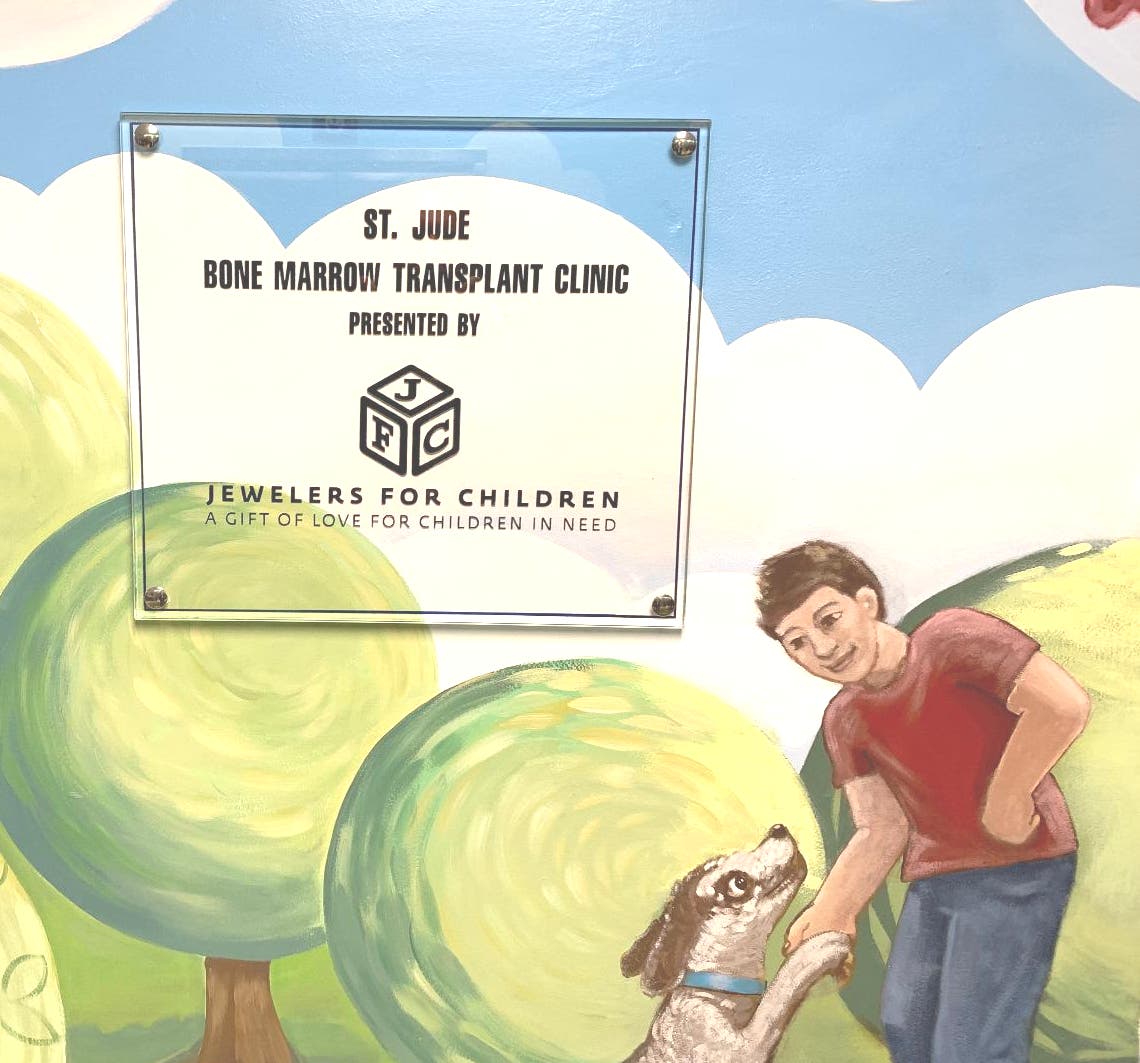 In 2018, we joined the Jewelers for Children Association, which to date, has donated millions of dollars (57!) to programs benefiting children through their charity partners St. Jude Children’s Research Hospital®, the Make-A-Wish® America, and the Elizabeth Glaser Pediatric AIDS Foundation - to name a few.

We believe we’re more than just a jewelry retailer. From our founding, to the core principles we run on, we distinguish ourselves as a company that provides the tools to create lasting memories.

Whether it be superior guest service, or best-in-class jewels and precious metals, our jewelry is a sentiment to our care, compassion and love of our customers.

Since 1910, the foundation of Rogers & Hollands and Ashcroft & Oak has always been, & will always begin with family. From founder, Bernard R. Friedman, to matriarch & acclaimed jewelry designer, Juell Kadet (pictured with husband Alan Kadet), the theme of exclusivity combined with handcrafted quality, have become the ingredients of our long history of sustainability & success. 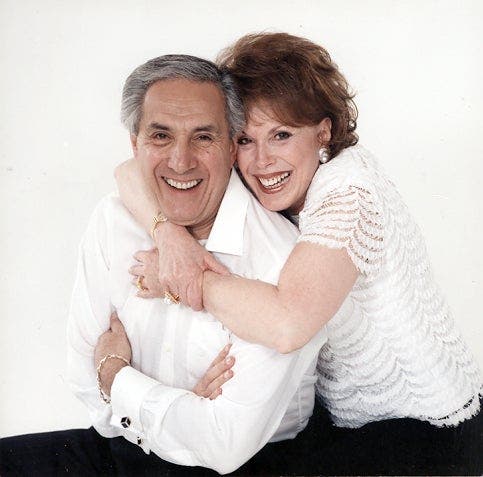 As your premier family jeweler, we welcome you into one of our 71 stores to explore our selection of engagement rings, diamond fashion & gemstone jewelry with the promise of providing knowledgeable associates and quality jewelry.

"I can’t think of a better business to be in than the jewelry business.  We have the privilege and pleasure of sharing so many happy moments with each other and our guests. We are fortunate to be able to help our guests celebrate holidays, events and any happy occasion to celebrate friendship or love."